Blackhawk Archers of La Crosse has its beginning in 1939 when Sid Frost of the YMCA sent out cards to all people he felt would be interested in forming an archery club (the La Crosse Archery Club). Thirteen men attended the first meeting and the rest, of course, is history. In the early years shoots were held whenever space could be made available including Memorial Field and the Myrick Gun Range. As the club grew, field courses were set up in Hixon Forest and then on Wilson Street in Onalaska, near the resent day Onalaska Luther High School. As Onalaska grew, and the needs for the city began to outweigh the needs of the club, a move became necessary and was made in 1969 to the present location on Moos Road between Onalaska and West Salem.

Located on 20.8 acres of coulee hillside (steep terrain), our club includes a year round 28-target field course as well we a warm up range that is marked out to 100 yards. The field range is separated into two halves; target and animal. Our clubhouse is simple and is designed to attend to the maintenance of the course and provide shelter/refreshments during tournaments and meetings. Our shoots are strictly held outdoors. 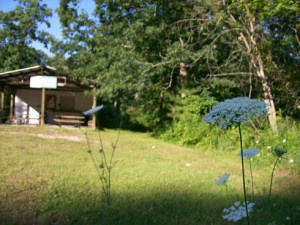 We are an original member of the West Central Field Archery League (WCFAL) which was formed in 1949 ad is considered to be the oldest field archery league in the state. WCFAL is a traveing field archery league and includes Coulee Archers, Winona Archers and the Tomah-Warrens Sportsman’s Alliance. In addition to the WCFAL, we also hold a number of 3D Shoots, and a summer club field archery league.

Blackhawk Archers is a member of the National Field Archery Association (NFAA) and the Wisconsin Archery Alliance (WAA). We also support youth organizations such as the La Crosse County 4H Shooting Sports and Kicking Bear.

If ou are interested in learning more about us, eel free to give a board member a call or better yet, bring your bow and stop out at the clubhouse and register. Come on out and enjoy a friendly atmosphere, make new friends and have a great time practicing a great sport.